Disclosure of the Producer of Style Exhibit 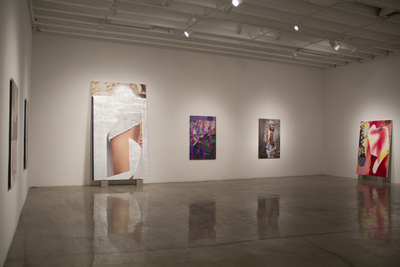 Disclosure of the Producer of Style

Fashion is intriguing in that it is a kind of ritual based on the concealment of seemingly perpetual shame. The psychological mask of style remains an agent of socially precipitated narcissism. Guilt about it stokes the fire. I pour water on this fire by aiming to mediate it with a spirit of respect in the handling of appropriated fashion images. The resulting works I construct may be taken and changed in turn. This non-hierarchical exchange of recast photos allows for the possibility of upturning established codes of visual hegemony.

Fashion propaganda tends to dismiss the power of certain populations. While I slip into the role of unacknowledged laborer of a psychological product, the object of envy, a carefree identity of extreme relevance, sweatshop workers in remote locations are set aside. A denial of the reality of self seems requisite. The projection of desire onto products, and ultimately onto human flesh, is contingent on the fallacy of a non-existent producer. I invoke an affirmation of the laborer, especially in regards to the woman, bearer of humans, on whom the psychic shroud is doubled down.

While I repudiate the deceptive attitude of fashion, I won’t deny simultaneously seizing the joy of faulty glamour. There comes a particular satisfaction in the lifting of rejected culture, and its transformation into exquisite specimens of communication. Beauty thrives on the make-do of its bankrupt beginnings.