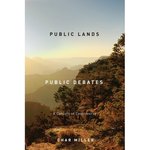 The subject of historic struggle and contemporary dispute, public lands in the United States are treasured spaces. In Public Lands, Public Debates, environmental historian Char Miller explores the history of conservation thinking and the development of a government agency with stewardship as its mission.

Owned in common, our national forests, monuments, parks, and preserves are funded through federal tax receipts, making these public lands national in scope and significance. Their controversial histories demonstrate their vulnerability to shifting tides of public opinion, alterations in fiscal support, and overlapping authorities for their management—including federal, state, and local mandates, as well as critical tribal prerogatives and military claims.

Miller takes the U.S. Forest Service as a gauge of the broader debates in which Americans have engaged since the late nineteenth century. In nineteen essays, he examines critical moments of public and private negotiation to help explain the particular, and occasionally peculiar, tensions that have shaped the administration of public lands in the United States.