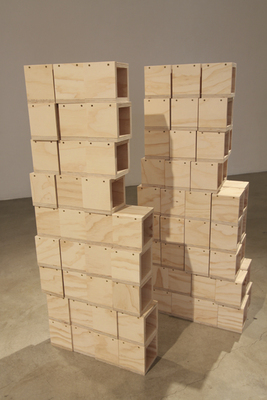 I strive to make objects of no complicity--arranging smaller parts to create larger forms, or allowing the combination of parts to allude to narratives without linearity, foreshadowing, point of entry, point of attack, conflict, context, or catharsis; a state of sustained stillness until equilibrium is no longer a desired result, at which point the parts of the whole can be dismantled, reconfigured, made anew. I think about words, rhythm, inflection, resonance or timbre, vocal dissonance, dismembered disjointed utterances, and repetition--somatic impulses guided by intent. Intention translates into action--an act of will, a willful act, an act of willful intent--a marker of making, solidifying and codifying an abstracted linguistic turn--turned into intentioned form--neither act nor intent as inception of the work, yet both accountable for the resultant iteration. Entropic forces encroach on seemingly stable forms that repeat, upward and outward--the expansion of volume extended in time playing on the senses in a collapsed field.