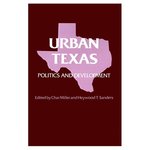 The major cities of Texas have developed through a complex web of politics, society, and economics. To describe and explain the state's urban evolution, the contributors to Urban Texas use comparative and multidisciplinary perspectives that explore the relationships among interest groups and voting; religion, reform, gender, and race; civic clubs and suburbs; infrastructure and land development. Texas' cities have experienced boom and expansion, bust and depression. They have also been marked by inequity and disadvantage. Today's cities face not only the limits of a period of economic downturn, but also the inheritance of a history of bias and public-sector inactivity. The story of such forces, challenges the myths that surround Texas' explosive growth and probes the staggering costs that growth has entailed.

Char Miller is associate professor of history at Trinity University, San Antonio, where he specializes in nineteenth-and-twentieth century U.S. social and cultural history. He is the author or editor of three other books and numerous scholarly articles.Heywood T. Sanders is associate professor of urban studies at Trinity University. He has published widely on topics in urban politics and policy.