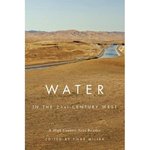 Water in the 21st-Century West: A High Country News Reader

Water in the 21st-Century West offers a timely look at the central issue facing the American West—the region’s diminishing water supply. It collects the best reporting on the subject, drawn from the pages of High Country News, the newspaper that sets the standard for coverage of environmental issues in the West. This book provides compelling perspectives on the water issues and controversies that roil the region, from the Pacific Northwest to the Great Plains, from the interior mountains to the southwestern deserts. The book’s contributors—among them activists, scholars, scientists, and many of the nation’s finest environmental journalists—offer hardhitting analyses of regional dilemmas, including the unpredictable impact of climate change; intense debates over decommissioning dams; emerging Native American water power; toxic threats to groundwater quality; and the escalating urban demands for water in Los Angeles, Las Vegas, Denver, Salt Lake City, and the Bay Area. Water in the 21st-Century West captures the range and nature of the arguments that have defined water politics in the region over the past decade. The collection probes the issues and explores creative attempts to find solutions, bringing a focus and clarity to the most contentious environmental issue the West faces. Water in the 21st-Century West will be an essential primer in assessing and mapping the West’s water future.